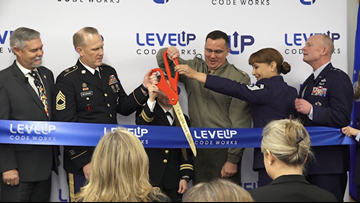 The Air Force conducts studies on software deployment, and its latest one did not send information to war fighters fast enough, according to U.S. Air Force Maj. Gen. Michael J. Schmidt, the program executive officer for command, control, communications, intelligence and networks, or C3I&N, based in Hanscom Air Force Base in Massachusetts.

“LevelUp Code Works’ most important people are our cyber warriors,” Air Force Col. Abel Carreiro, senior materiel leader of the cryptologic and cyber systems division of C3I&N at Joint Base San Antonio – Lackland said during the event that heavily featured one cybersecurity representative from each branch of the military.

“This is like a Christmas present that will keep on giving, not just for San Antonio, but for our national defense,” San Antonio Councilman Clayton Perry and one of the chairs for San Antonio’s military transformation task force said during the event.

LevelUp fits in with the cybersecurity work that has been done here for more than 20 years, said San Antonio Chamber of Commerce President and CEO Richard Perez, another chair of the military transformation task force. He said that the Chamber helped LevelUp communicate with the city regarding permitting issues.

As previously reported by the Business Journal, LevelUp will have a software factory called Platform One, which provides a set of tools and services for software developers across the Air Force. Platform One will be replicated to Air Force program offices to allow them to develop, secure, deploy, and operate applications, also known as DevSecOps, technology.

LevelUp will use the software factory to develop capabilities for the Air Force and Department of Defense in conjunction with civilian software developers.

“Any time you pair the government or military with the private sector, you’re able to get a better product,” said U.S. Army Col. Peter Velesky, the deputy commander for JBSA