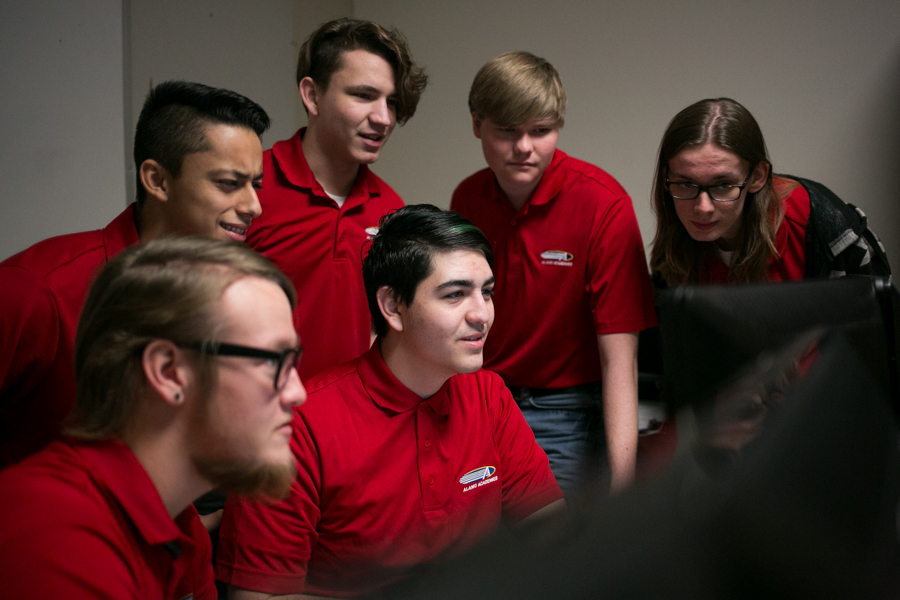 The group of high school students were surprisingly animated at 7:30 a.m. on a chilly Friday morning. But the students were excited to be on the Alamo Colleges campus, talking about their individual CyberPatriot teams– and they just happened to be among the top ranking teams in Texas.

The Air Force Association created CyberPatriot in 2009, a national youth cyber defense competition designed to inspire high school students into entering careers in cybersecurity or other science, technology, engineering and mathematics (STEM) disciplines. The 2016 CyberPatriot competition included nearly 200 teams from the San Antonio region, more than any other region in the nation.  Seven of those teams are part of the Information Technology & Security Academy (ITSA), a program offered by Alamo Academies. A national award winning STEM-based program, the nonprofit program works in partnership with industry, the Alamo Colleges, area high schools and local cities to provide high school juniors and seniors with two years of tuition-free curriculum that will lead to in-demand STEM skills and critical job fields.

Bussed daily from their respective high schools to the Alamo Colleges campus for 2 ½ hours of instruction early in the school day, ITSA provides high school juniors and seniors with 30 college credit hours that specializes in information technology, which includes networking, security and programming courses. While enrolled in ITSA, students also have the option to participate in the annual CyberPatriot competition.

The CyberPatriot teams compete to defend a national company’s computer system from malicious cyberattacks, while maintaining IT services for its users. Each team is paired with professional mentors in the community who volunteer through the CyberPatriot Mentor Program. ITSA’s CyberPatriot teams are currently mentored by Jacek Materna from SecureLogix, Troy Touchette, chair of computer information systems at San Antonio College, and Mike Matuszek at San Antonio College.

During the CyberPatriot’s State Round earlier this month, a team of ITSA seniors earned a perfect score, which resulted in a tie for first place nationwide with a team in Colorado. The round also named a team of ITSA juniors as fourth in Texas and 22nd nationwide. The next competition, held Feb. 19-21, will determine the top 12 teams in the nation before the National Finals are held April 10 to 14 in Baltimore.

“Considering this is the first time the junior high school student team competed in CyberPatriot, ranking 22nd place nationwide is pretty impressive,” said Jacek Materna, the team’s mentor. “The senior team’s perfect score on an incredibly difficult cybersecurity competition makes them stand out among all the U.S. teams. I’m sure employers will take notice also.”

When the students were asked what led them to CyberPatriot, almost everyone responded that a teacher or fellow student had encouraged them to compete. All but one of the students had professed an abiding interest in computers from an early age.

“I remember first messing with computers when I was four years old,” junior Eddie Flores said.

On the other end of the spectrum, junior Hector Iruegas confessed that he knew nothing about computers before joining the CyberPatriot team.

“My dad is a computer geek who works for Southwest Research Institute,” Flores said. “When I heard about CyberPatriot, I thought it would be interesting to try it out.”

Apparently, it was interesting enough that Iruegas is spending his second year in CyberPatriot as a member of the the top ranked high school senior team in the nation. Iruegas has already been offered admission into Stanford University as well.

Long-term plans for these students point to promising career opportunities. “I’d like to work for either Google or NSA,” said junior Issac Knotts.

“I’m looking forward to my internship with (the locally based cybersecurity company) Delta Risk,” senior Reed Eggleston said. “I was able to find a possible vulnerability on their website and brought it to their attention.”

The most impressive part of the student answers from both teams was what they considered to be the factors contributing to their CyberPatriot success. Their answers were consistent, regardless of age or year in high school. The students gave answers that were thoughtful, mature and indicative of a great work ethic.

Recognizing the importance of strong leadership figured prominently for both the junior and senior teams.

“Reed (Eggleston) is a huge part of our success—he sets the team dynamic and prepares the team scripts for us to work on,” said senior Carlson Lindley.

“Issac (Knots) and Eddie (Flores) carry our team; they prepare the scripts for the team to practice and they make sure the scripts work beforehand,” junior Ryan Yu said.

Hard work and recognizing the strengths and weaknesses of each team member means each team comes together to form a cohesive package of cybersecurity skills.

“We get along well and we all know who excels at what system, and that contributes to our multilayered understanding of all the systems, how they work together and how deep to look for vulnerabilities,” senior Brendon Downs said.

Both teams agreed with senior team leader Eggleston’s bottom line: “We are all confident in each other’s abilities.”

All CyberPatriot students are offered internships with companies, internships that often lead to job offers. Given the work ethic and skills these students possess, it’s no surprise.